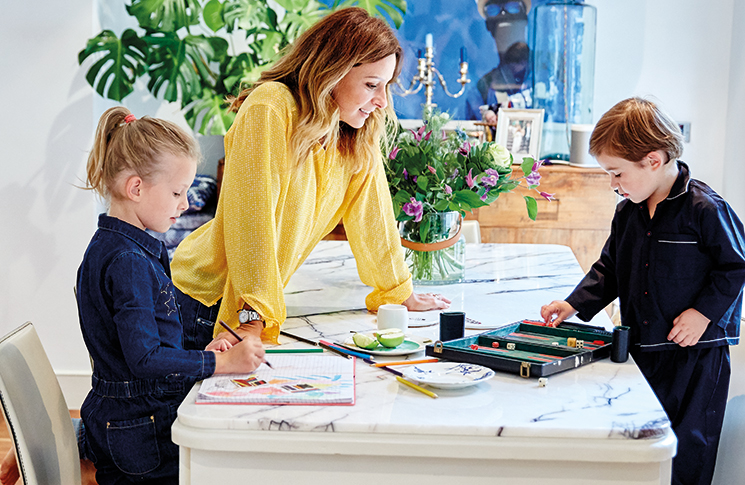 Stepping inside Melissa del Bono’s impeccably chic West London home, it’s hard to believe that lurking behind the scenes is energetic three-year-old Baxter and his older sister, Clementina, six. The Notting Hill townhouse seems to provide plenty of space for the two youngsters to burn off steam, while Melissa busies herself in the kitchen making proper Italian coffee for us both. Her face lights up as she tells me how life has changed since the arrival of her children. “They’ve reminded me what it is to be innocent and curious again. My life is so enriched by these little people who become such a special mix of you and your husband!”

Said husband, Doug, is now CEO of Meli Melo, the handbag label Melissa set up more than 10 years ago using her own savings. Following an early career in fashion PR, she decided she wanted to create a handbag line that was both understated yet luxe, and all handmade in Italy, from where her family hails. 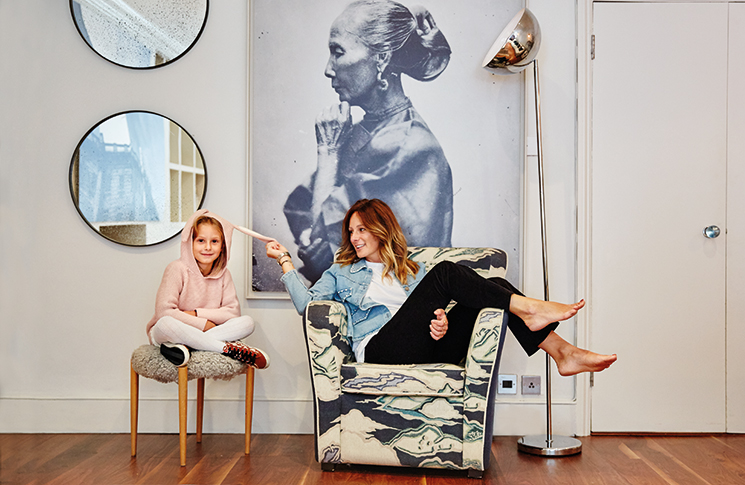 Though the brand started small, its unique designs quickly caught the attention of everyone from Sienna Miller and Poppy Delevingne to Alessandra Ambrosio, and having grown significantly since then, Meli Melo now boasts its own store on Portobello Road.

Following nine months of nausea during both her pregnancies, when her babies arrived Melissa needed to find a way to savour her fleetingly precious time with them while keeping the business going. So, Doug stepped in to help with the financial side and they worked so well together he took over as CEO in 2014. These days they happily live and work together, giving the 38-year-old designer the career and life balance she so wanted with her children.

Like all mothers though, she never feels like she’s getting it quite right. “I wonder if I am juggling it all well enough, the guilt is constant!” she laughs. “But there are ways I make it work, and I have got better at managing it all. Like, even though Fashion Week is always at the beginning of the school term, I make sure I am around for the children. And in the first nursery days with Clementina, I didn’t appreciate the importance of the school holidays, but now I see how burnt out and tired they are from school and how important it is for them to be with their parents without rules and routines.” 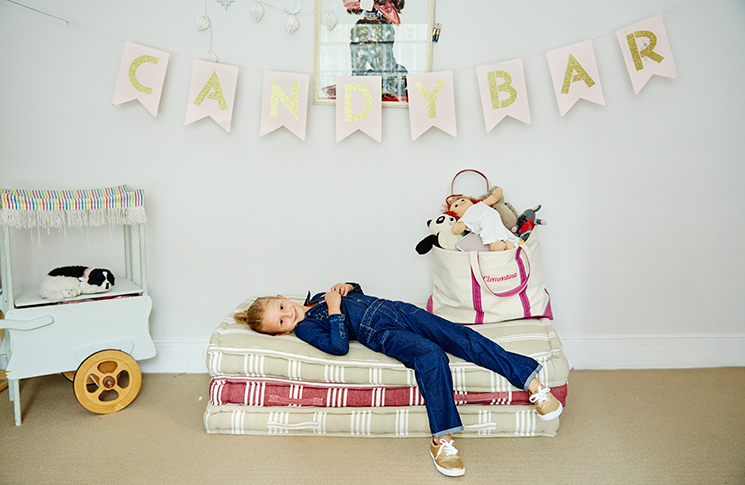 The family home is situated just off Portobello Road, an area Melissa describes as feeling ‘like a village’. “I love that the kids know everyone here,” she explains. “The baker, the florist, the butcher – and their school and my office are less than five minutes’ walk from the house. It’s given them well-established roots in the city,” she says.

It’s also an area known for its excellent childrenswear boutiques, including Caramel, Bonpoint and Petit Bateau, all of which Melissa has discovered to her delight. A particular favourite is Wild & Gorgeous. Melissa explains, “My husband loves to take the kids to the store in Westbourne Grove. They do such fun pieces with the right amount of sparkle for the girls, and the coolest, quirkiest designs for boys.”

If she isn’t shopping locally she ventures to Liberty on Regent Street for its iconic prints, and Oeuf NYC, the American brand which offers a perfect blend of old-school and quirky. Another go-to is thetot.com, an amazing curated collection of everything mothers need. And for shoes, it’s always Veja for Baxter and Chipie old-school plimsolls for both kids. Melissa says, “I grew up in them and they just bring back such good memories. Clementina was also just given a pair of Golden Goose sneakers too, the lucky girl!” When Melissa gets a minute to herself she loves nothing more than a wander down Golborne Road, where she finds much of her inspiration for upcoming collections.

“If I can steal an afternoon away, I love a yoga session followed by a juice at Bodyism. Or for something more adventurous, rollerblading in Hyde Park is so much fun, followed by a glass of wine at Dock Kitchen with friends,” she adds.

After a day out with the children – favourite haunts include the Natural History Museum and Clip ’n Climb – home is very much a retreat from the hustle and bustle on their doorstep. The house is what Melissa describes as ‘cosy Scandi with an Italian twist’. The palette, all rich greens and white, with a dash of sage and blue thrown in for good measure.

Family life focuses not only around the kitchen table but also the oversized, BB Italia sofa, the perfect place for Melissa and Doug to relax in the evenings and the children to romp during the day. 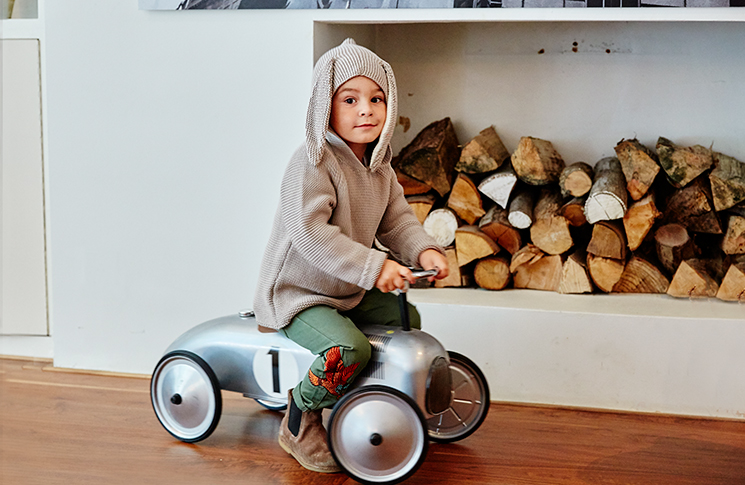 The linen cushions were bespoke from The Cloth Shop in Notting Hill, the velvet ones from the French store Caravane in Marylebone. Also from BB Italia was the striking portrait of a woman which sits above a chair upholstered by Melissa in fabric by Robert Allen, making for an eye-catching corner of the house. Another bold piece of art is the flamingo print, which was a gift from her husband for her 30th birthday.

Melissa is also a big fan of antique shopping, finding pieces on Portobello Road and in Sunbury Antiques market. “Working in fashion, I’ve found increasingly that interiors and art give me a real kick,” she says.

But it’s in the décor of the children’s rooms where Melissa’s playful side really comes into its own. “It’s what I would call eclectic!” Melissa explains. “I bought the ‘candy bar’ garland from Liberty, picked up the mini deckchair on a trip to Polzeath in Cornwall, the ice cream stall at Les Couilles du Chien on Golborne Road, and the lampshade in Clementina’s room she drew on herself depicting her favourite dinosaurs and dogs. It’s kooky but I love it.”

So what does next year have in store for the dynamic designer? “For now I am excited to have just launched a collaboration with fashion icon Olivia Palermo who brings her New York-cool to our new design, the Severine. There will be another collaboration this year, too, and I’m expanding in the US market so its going to be a busy one!

“But I am lucky I love my job, and the fact I am managing to make it work around my children makes it all the better.”