With Disney+ growing in popularity and said to rival Amazon Prime as the second biggest streaming service, a new study has revealed the world’s most popular Disney films.

With the UK back in lockdown, sometimes the only solution for keeping the kids entertained (and guaranteeing some peace and quiet)  is a bit of TV time. There’s absolutely no judgement here! Whether you’re sitting the little ones down while you try to navigate working from home, or you’re gathering around the TV to watch a classic Disney film as a family

A study by Parkdean Resorts analysed Google search data to reveal which Disney+ film is the favourite in every country across the world. Overall, the world’s most popular Disney film choice is Frozen with 1.9 million Google searches globally every year since it launched. This is then followed by Avatar, Cars and Aladdin.

10 Most Popular Disney Films in the World

The data shows that Avatar takes the crown in 28 countries, including the UK, while Frozen is favourite in just 16 but has the largest amount of searches (1.9 million) of any Disney+ films in the study.

The favourite Disney+ film in the US is Frozen, with Cars being the favourite in New Zealand. 101 Dalmatians is a top choice for those in Canada according to the study and Ratatouille being a FAVE in France (quelle surprise!). 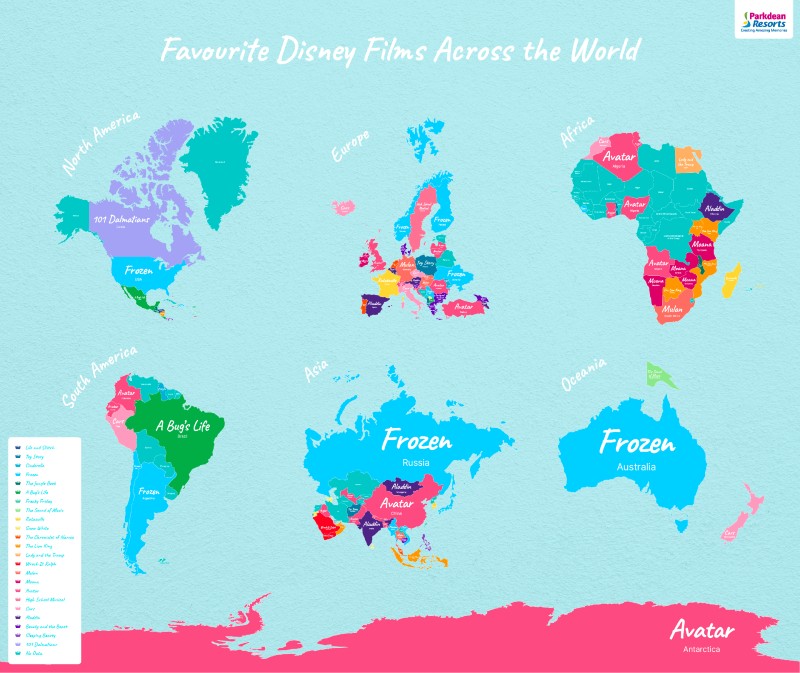 In recent years, Disney has since released several live-action revivals of their most iconic films, something which has kept some of the classics popular among younger viewers. Lady and the Tramp, Cinderella, Aladdin, Beauty and the Beast, The Lion King and Mulan all sit in the UK’s top ten and have had the blockbuster treatment, introducing the classic stories to a new generation.

Other standouts in the UK include modern animated favourites Moana and Cars.

10 Most Popular Disney Films in the UK